About Kevin Flynn and his work in Italy 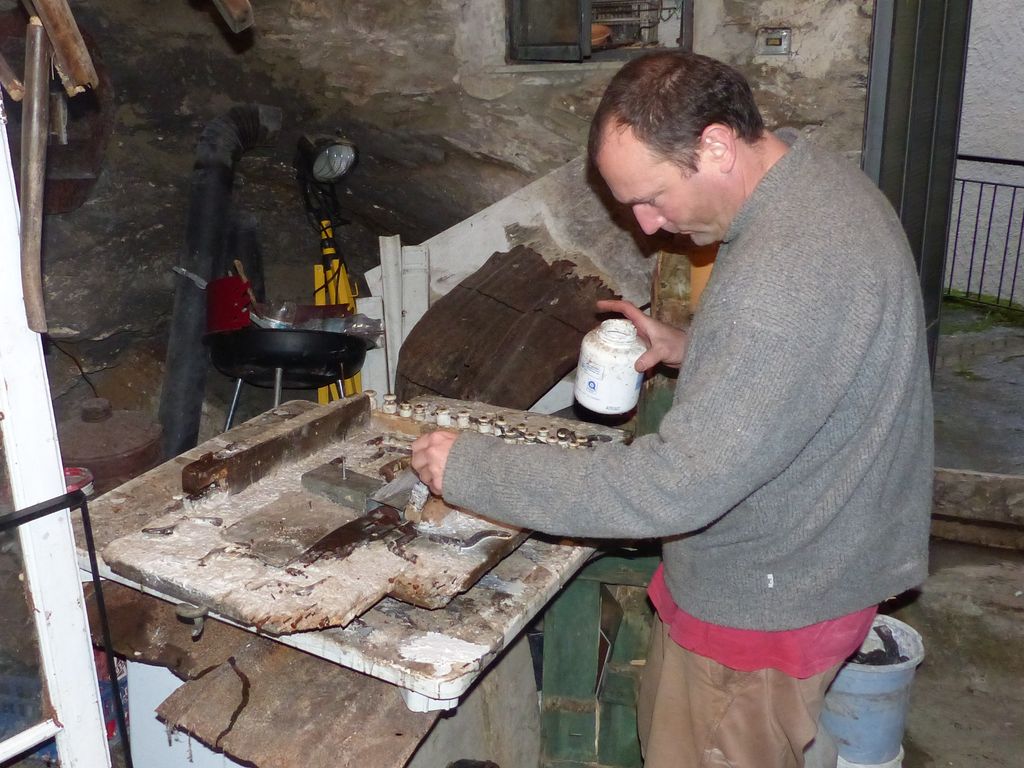 For artists of any genre in dark Europe, for long centuries the light Europe of Italian sun was a place of learning. Drawn not simply to adopt the art of Michelangelo or Raphael but as many reports show, it is the inspiration they draw from their life in the country and the effect of another light that shines on their own skills and expressions. So there were many of the later famous Dutch and Flemish painters of the 17th and 18th century who spent long periods in Italy. Heinrich Heine and Johann Wolfgang Goethe were part of this spiritual migratory movement of dark Europeans to the light of Italy. This migration and influence can be described in detail in the life and work of Johann Heinrich Tischbein who with a Kassel scholarship first visited Rome to study in 1779 returning later with the support, influence and eventual friendship of Goethe reflected in the relaxed Italy of “Goethe in the Roman Campagne”. The British subscribers of these individual pilgrimages are also legion, for example the landscape painter Richard Wilson (1714 -1782) studied for 8 years with Francesco Zuccarelli or even the most influential English painter of the 18th century Joshua Reynolds (1723-1792) studied the old masters in Rome for two years and acquired there a taste for the grand style. The work of William Turner (1775-1851) is not without its “instruction” by Italy, he explained Italy had characterised him throughout his life. The poet Percy Shelley (1792 – 1822) reflected on his time spent in Italy in his work “Letters from Italy”. He and his wife Mary (1797 – 1851) in her own right a successful author (Frankenstein) remained in Italy after first visiting Lord Byron in Venice in Italy eventually settling in Livorno. Later the successful English trades people Thomas and Daniel Hanbury can in turn be described as life artists, recognised with the genius of the purchase of a villa at the location of Capo Mortola creating in collaboration with the German “plants artist” Ludwig Winter the founder of the Riviera of Flowers a unique overall work of art – The Hanbury Gardens currently a World Heritage site.

Now we are in the province of Imperia. One hundred and forty years after Hanbury came the English artist Kevin Flynn who together with his wife Kathleen Cross bought a small house with a cantina deliberately not on the sea as a “Riposo by dolce far niente” but right in the middle of the “hinterland” of Imperia, located in the centre of the village of Borgomaro as “Casa per vivere e lavorare”. The Cantina was the ideal working space. It must first be said that the skilled artist Flynn in his home town of Nottingham earns his living as a teacher and in England this precipitates his artistic profession. Of course during his time in England he reflects on his art and its forces, but only in the genius location of Borgomaro is it released. For the last ten years in Borgomaro up to a total of four times a year a total of a hundred weeks here his artistic self is expressed. In this time Flynn looked in concentric circles around the cantina; in the earth, in the wayside and in other cantina, in abandoned Fienele everywhere in the village for his artistic material: forgotten artefacts from wood, iron, stone and much more — DALLA  TERRA  ALLA  LUCE!  FROM  EARTH  TO  LIGHT!

An incomplete list as he processes objects and materials, it could be a zinc plate, nail, marble, grid, doors, windows, flat printed sheet, boxes, tools, bronze, mounded plaster, linen, earth, ash, grit, wire, agricultural equipment from olive and wine production, old coloured areas, paper, shoes, glue. All these artefacts referenced with their use and weathering on the culture of work in Borgomaro. After the collecting comes the matching against each other, which artefacts entertain – tells you your story? – Arranging the voice of fragments into whole sentences and finally, fixing in a new context the viewer of the “old stuff” in astonishment. “Wonder” is according to Aristotle the human capital that the breeding ground for science and art forms. This is not just about Flynn adaptations or even copies of historical models. The traces of use are not polished off. With British humour he outlines new contexts, surprising new interpretations of history, the authenticity can be experienced. This process of transformation is opened to the inhabitants of the area and is from the perspective of respect for historical traces, proud of its own local history, tradition and renewal.

Of course you could think of the works of the artist Flynn as being comparable with Arte Povera, about a Mario Merz or Pistoletto, but it is not completely. Whilst Arte Povera and Flynn work with poor materials the Arte Povera movement uses these without embedded social and cultural context whereas Flynn uses materials embedded in a social and cultural context. The above are all north Italian Arte Povera artists working in the styles of the Dada movement of a 100 years ago, from simple materials they created art grown out of “the painting to assassinate” (Miró 1927) these were the materials of the social and cultural context, context updated Flynn is the cultural and social content of a centuries old village culture in a gratifying, unpretentious way. Of course you can also think of Marcel Duchamp and “ready made thinking” its 100 years old performances also presented the raw industrial product then as a portent of worse things to come: “See this is art, why does it need painting?!” Marcel Duchamp is also not quite so. Surely you can also think about David Nash’s wood fire sculptures, Dieter Roth’s expressionist garden assemblage or Günther Uecker’s strictly playful material (sand, wood and nails). Flynn may be influenced by them, but how each artist is confronted by other artists and many, many influences and transformations positive or negative is nature.

Flynn’s nature is the recognition that culture is always working with nature, with the nature of things, of living beings, for people; but always work, the act of work and actions of people, the conditions to convert is also connected with the empathy for earlier work. This without the advent of nostalgia to achieve its individual character.

But now to put a famous artist next to the Englishman Kevin Flynn I mention the Austrian artist Arnulf Rainer whom to my knowledge Flynn is unfamiliar with. Throughout his life Arnulf Rainer’s art repainted and overpainted images bringing them to perfection, he sculpted hundreds of wooden crosses in his distinctive form of over- moulding. So you could perhaps define the nature of the Kevin of Borgomaro as follows: Kevin Flynn over-moulds the cultural history of the work of a Ligurian Village.

To conclude with a few words about the exhibition itself. It is great good luck and to the merit of the municipality and its mayor, that the exhibition “10 years of Kevin Flynn in Borgomaro” takes place in the central, newly restored Palazzo Doria and not in a “neutral” place. This magnificent villa palazzo is in the modest Ligurian style using technology from many centuries ago, built from local rock as have been the town houses too. In its eleven rooms can Flynn’s topics of fire/ash to sun be wonderfully arranged. Ascending through the floors it has in my favourite room “Il Sole” with a wonderful view on all sides of the surrounding village. There is also a superseding. The case is thus, in itself a part of the basic concept of the exhibition. The citizens of Borgomaro can in the former “prison”, bring your finds for the artist, then in later years “processing”. Flynn has already announced that after the end of the exhibition he will give this work to the Community and the inhabitants, that this is the right thing to do. This all taken together could also say: the life and work of the English artist in the Ligurian Borgomaro, the exhibition at the Palazzo Doria and the artistic and cultural options for the future are the total of a “social sculpture” (Joseph Beuys, has also worked a lot in Italy). 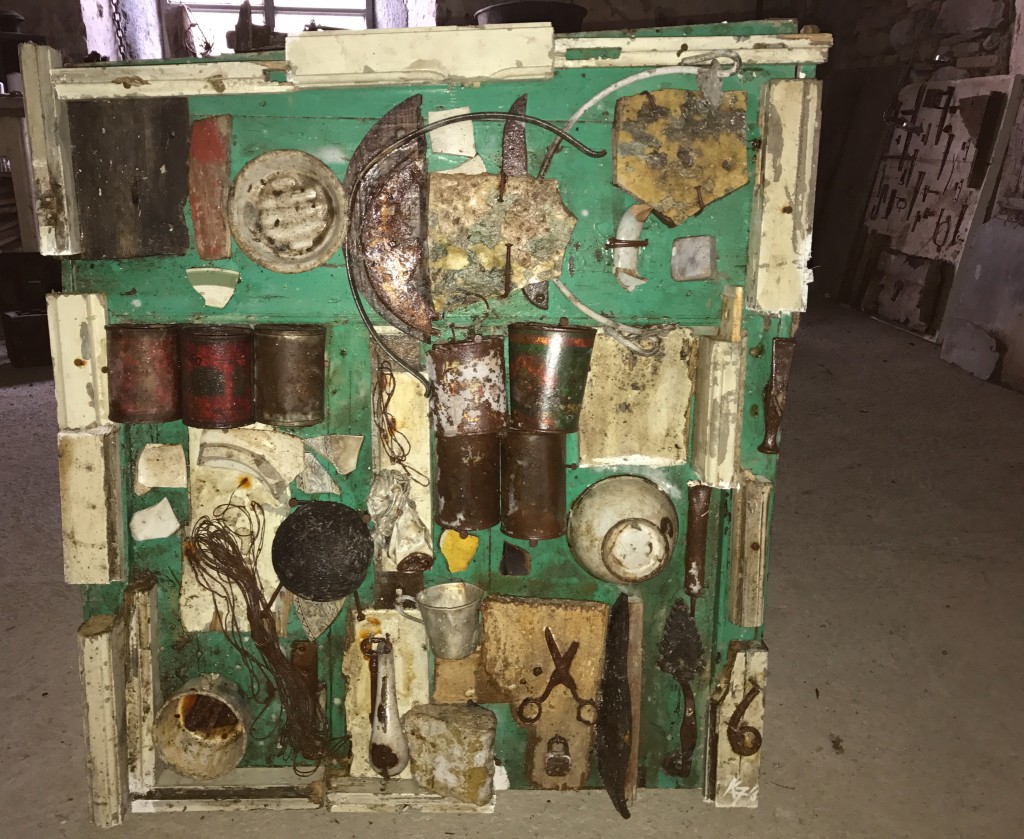